We Must be Bonkers

Looks like the office temperature is going to fire up this Red Nose Day...

With less than a month to Red Nose Day, reflexblue have their thinking caps on brainstorming some fundraising ideas. Popular choice at the moment is a chilli-eating competition (are we mad?!). Scott has already offered to eat 5 Scotch Bonnets, but we think he should up his game and give the Trinidad Scorpion "Butch T" (voted hottest chilli in the world) a go? 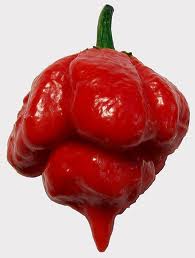 There will need to be a lot of milk in the office and we will have to secure a fair bit of sponsorship if he is going to handle one of them.

Don't worry, it won't all be torture. During the week we also plan to have some delicious cakes and bakes, so if you are near the office pop in and buy yourself some.

It's all for a good cause!
Posted by reflexblue at 15:24
Email ThisBlogThis!Share to TwitterShare to FacebookShare to Pinterest