This week has seen a massive achievement for Greg Docherty, Colin's son, as he is selected to play for the under 17's Scotland Squad.

His interest in football started at a very young age, signing with Hamilton at just 9 years old. This week Greg has been playing in Sweden where he also turned 16. In his own words, he said this is the best way he could have spent his birthday, with more celebrations when he is home this weekend.
The team had a successful week. Their first game against Sweden resulted in a draw but they went on to win their second game 3-1 with Greg playing in both of them. We are sure they will take great joy in the fact that they are doing better than Scotland’s First team…
Congratulations and Happy Birthday Greg from everyone at reflexblue! 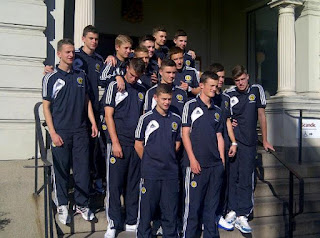 Posted by reflexblue at 13:48
Email ThisBlogThis!Share to TwitterShare to FacebookShare to Pinterest