An Encounter with Peter Howson

Our digital team got the chance to meet and film the internationally acclaimed Scottish artist Peter Howson OBE this afternoon at McTear’s Auctioneers.

Peter Howson is one of Britain’s most talented and celebrated artists with some of his most famous paintings being of David Bowie and Madonna. 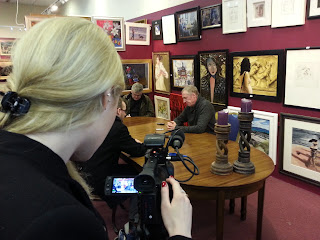 The sale that takes place later this month at McTear's will feature 390 paintings, drawings and sketches, which belong to the artist’s former wife Terry Howson. Included in the auction will be all ten original drawings of pop icon David Bowie which are valued between £1000 and £2000 and also ten rare sketches of Madonna.


Posted by reflexblue at 17:16
Email ThisBlogThis!Share to TwitterShare to FacebookShare to Pinterest