Interactive Polar Bears to join the Superbowl this year!

The creatives at Coca-Cola must have spent a few late nights working on their new campaign for this year's Superbowl. Set to feature two of the brands polar bear mascots, the whole commercial will react to the on-field action as well as the other adverts.

The animated bears will be showing support for the competing teams - New York Giants and New England Patriots - and will give real-time reactions to everything that happens throughout the game. If the Patriots score a touchdown then you'll see the Patriots bear raise his hand for the touchdown sign, and if a racy advert appears on screen, the bear will cover its cub's eyes.

As well as an ingenious piece of advertising, Coca-Cola are using the campaign to raise money and awareness for the World Wildlife Fund to help protect the Arctic home of the polar bears.

To join the Coca-Cola Polar Bowl Party you can RSVP here  and join in with the live chat throughout the game on 5th February. 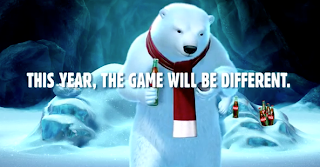 reflexblue.co.uk
Posted by reflexblue at 16:07
Email ThisBlogThis!Share to TwitterShare to FacebookShare to Pinterest